The boat stopped, and we got out on the floating island of Uros in Lake Titicaca, Perú. The ground, made of reeds, was very peaty. The ground gave way a little when you stepped in it, but bounced back up. A couple of locals explained how the village was built from blocks of reed and compost. Then our guide told us of the activities in the village, which included fishing for food. Our group didn’t get to fish, though. We also dressed up and got our pictures taken. I was put in a shirt and hat against my own will that made me look like I was five years old. We took a local boat to the next floating island, which was empty. Then we got back on the tour company’s boat, went to the next island, bought some snacks, and headed to a real island.

The climb up to the plaza was exhausting, and during, when I had something to say, it was barely audible. Though, the Snickers bar I’d had gave me a boost, but not for long. We bought a few bracelets, and by the time we started walking again, we couldn’t even see the back of the group. When we finally reached the lunch place, I was ready to pass out from exhaustion and take a nap. The food gave me renewed strength, and we bought a bracelet for a friend.

We passed a sheep surrounded on one side by the spikiest bushes you’ve ever seen, and on the other was a steep climb. With it was the tiniest black lamb you’ve ever seen, which had to have been newborn. It was black as night, with a white splotch on its head. We tried to get a little bit closer, but the mom made a horrible noise. The message was clear: Stay away from my baby! We took some pictures, and when we got back down, we headed off towards Puno, watching the waves lapping on the side of the boat.

A belt made from alpaca and women’s hair 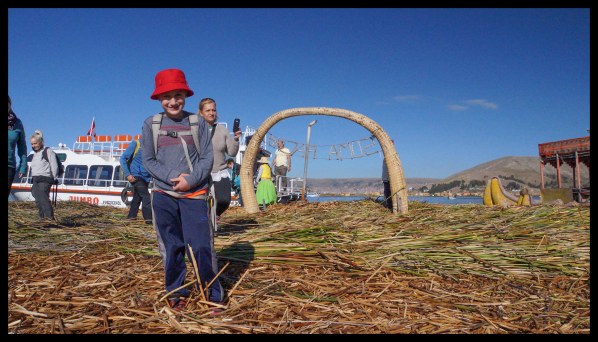 The president of the village, Walter, showing us how the islands are made.

We saw a natural soap demonstration

I called this funny-looking chicken over 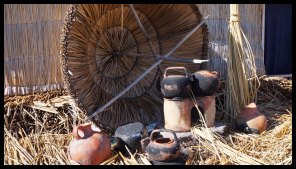 One of the villager’s kitchens 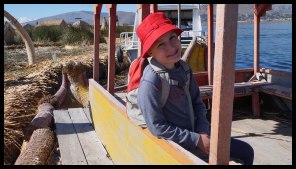 A ride in a Traditional Boat made from reeds