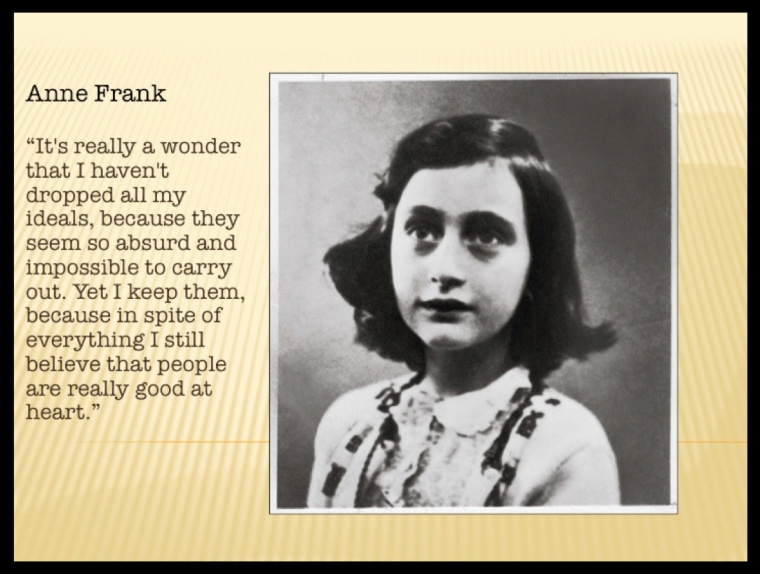 Recently I finished reading The Diary of Anne Frank, which is about Anne’s time in hiding during World War II in Amsterdam. It taught me that in times of trouble, try to enjoy life to its fullest. Whether it’s painting or doing what she did and writing a diary, get your feelings out, and express yourself, in your own way. Don’t keep it down or, like Anne said, you’ll suffocate. The diary fascinated me, how she was in a bad situation, but never gave up hope. Times got hard, but she pulled through, and showed that effort pays off. Always.

We went to the Secret Annex, where she, her family, and the other four people in hiding with them lived for two whole years. Anne Frank lived there with her parents, Otto and Edith Frank, her sister, Margot, and the van Daans, Peter, Petronella, and Hermann. Eventually, Albert Dussel joined them. They were doing so well… until someone betrayed them. On August 4th, a month before the liberation started in the Netherlands, the eight people in hiding were uncovered and arrested, as well as their helpers Johannes Kleiman and Victor Kugler. Their other two helpers, Bep Voskuijl and Miep Gies-Santrouschitz were left all alone. The eight members of the Secret Annex were split between five different concentration camps. Anne was shipped to Bergen-Belsen, where she died from typhus. Only Otto survived. After he heard the news that his two daughters were both dead, he spent multiple years trying to get Anne’s diary published.

**Note photos were not allowed in the museum.  All images used in this post are taken from internet searches.**