One day, long, long ago (okay that’s not true), we went to see frogs in their natural habitats, in Springside Nature Reserve. I didn’t catch any, but some other kids did, all pretty small. One was very  small. He was a cute, black, bush squeaker. The other frog was a lot bigger, and he was light brown, with light green spots on his sides. This was a Natal Tree Frog. Like you might expect, he had the classic ‘tree frog’ eyes. Others were caught, too. There was a small, light brown one, with a yellow stripe, all the way down its back. I was able to identify this frog as a Quekket’s River Frog. As I identified every frog, I tried to find my own. I even went far from the group, and listened to their calls. For some reason, I could never quite tell where they were. Well, that’s nature. Sometimes you get lucky. Sometimes, you don’t.

We also went hiking into a lush, green place, called Giba Gorge. We hiked through relatively cool forests and grasslands. We were going to McIntosh Falls, a waterfall with a pool below it. The waterfall actually looked like the river creating it split into many rivers before recombining in the pond. There we saw a dragonfly laying eggs. It was strange, because the male was attached to the female, and she took so much time, but it was still wonderful. We saw other animals, like frogs and centipedes, and went through forests that almost made it feel like home. Almost. It was very hot and humid, which did not feel like home. At all. Oh, the wonders of the forest.

Got to hold this tiny frog! 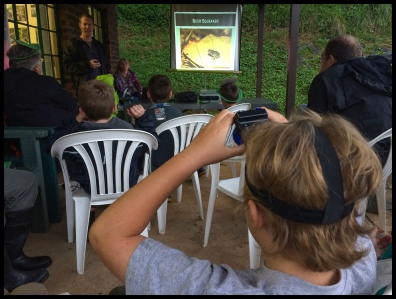