Up, up, up, we went, up the rocky hill. I was hiking in the Atlas Mountains with my mom. Dad had a stomach bug, so he couldn’t come. We hiked through the barren landscape through the Todra Gorge, up into the Atlas Mountains. It was a tough and slow hike up, but we got to a small hut near some caves, where Berbers lived. Mom and the guide had tea there. A couple of young girls where there with their grandma. They curiously but shyly watched us from a distance. The guide explained that they stayed with their grandma year-round, while their parents moved around the country in search of food. They were the nomadic Berber people, the indigenous people of Morocco for over 3,000 years. Other cultures came and went, such as the Phoenicians, the Carthaginians, the Arabs, the Spanish and French, but all of them found the native Berbers. And so did we! We hiked back down the rocky, barren hill, into the valley and the town by Todra Gorge!

We also hiked near Imlil in a two-day trek to a Berber village and back. I know I said that the Berbers are nomadic, but some of them settled down into villages and towns. We had a long hike, during which we saw an amazing waterfall. But, man, was the waterfall cold! No, no, no, I didn’t get in it! Why would I do that? The spray went everywhere! That’s how I could tell it was cold! The village was pretty cool, though. It was around a couple centuries old. Wow, that’s really old! We stayed the night in the village. Our room was plain, but I’m not complaining. We slept in sleeping bags. Why? Because nights are cold in the Atlas Mountains! We were warm, though. And I found that I prefer sleeping in a sleeping bag to sleeping in a bed! Yes! Really! I think it is because I like my whole body surrounded by warmness and softness. With a sleeping bag, I get that! With a bed, I don’t. Well, the next day, we loaded our stuff on the mule and headed back to Imlil!

A view of the pass we hiked through. It was HARD!

It was a long walk to see this waterfall. It’s small now because of dry season. 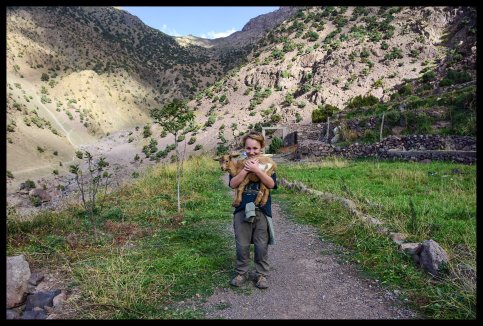 I got to hold this baby goat!

Tried walnuts right off the tree…eh. 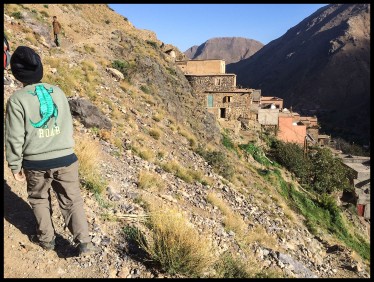 Played Uno with some kids I met. 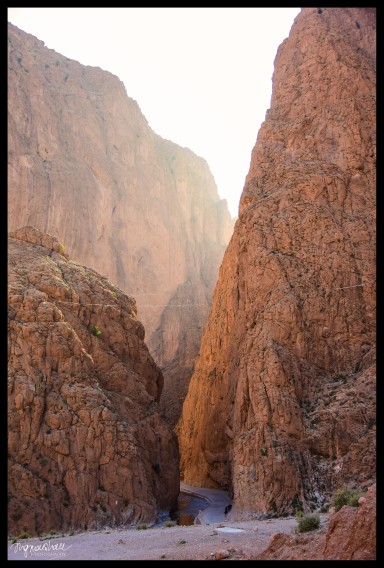 View of the gorge.

Near the village we stayed in in Todra Gorge.

Cave homes of the nomadic Berber family who gave us tea.

The villagers farm in the river valley. 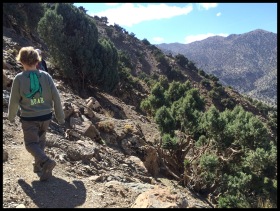 Hiking to the Berber village in Azadan Valley.

On my way to the waterfall. It’s WAY out there in the distance behind me!

Near our village in Todra Gorge

One thought on “High Hiking”