We didn’t do much in Tegucigalpa, the capital of Honduras. It was mainly about being together with family. One day, though, we went to a beautiful village close to Tegus called Santa Lucia. We’d been there before, when I was a baby. My parents talked about how much it had changed. We also saw a church there. It was beautiful.

Another day, the whole family got together, and my great-grandfather was talking about his grandparents, his parents, and his childhood. About 75 years ago, my great-grandpa’s aunt’s dog was used to carry messages . Sometimes, the messenger dogs would travel very long distances. But there was something very special about that dog. The family would crank on the music, and that dog – and only that dog – would dance like a human. Also, the aunt could talk to lots of animals, even snakes. It is very funny to imagine.

On almost our last day in Tegucigalpa, we saw an art museum. It wasn’t just an art museum, because it also contained a fascinating history of the country. Like all other Latin American countries in the Cold War, it had a terrible dictatorship supported by the U.S, just because it wasn’t Communist. Also, there was a horrible display to educate the public of a local problem that was simply terrible: the killing of women for simply being women. It was a series of sculptures of women that had hands instead of heads. Basically, they had no voice. Each woman had a sign in Sign Language on the hand on their neck. There were lots of paintings, too my favorite painting was a replica of graffiti. It looked like something I would have drawn. It was an animation of a DJ in a spacesuit. Nothing cooler than a DJ astronaut! 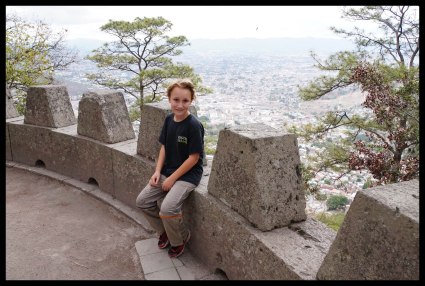 Fun House Mirror – I got shorter!